Certain file formats allow for audio tracks and channels to be identified with specific names and/or designated sound field assignments. Having this information in a file enables media players to properly direct audio to the appropriate speakers, or to apply processing (i.e. downmix) to the audio when needed.

One of the options in a transcode task’s target settings for an audio track is to include a track_name value. In the example below, there are two audio tracks, with the first track to be named “LEFT TOTAL” and the second track named “RIGHT TOTAL”.

The resulting file produced here would be reported in the Hybrik’s Storage Browser as shown: 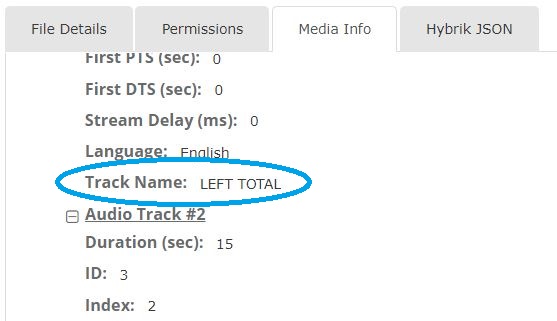 The next example includes the channel_designators settings for both of the audio tracks. When applied, the resulting file will contain the channel information which can be accessed during downstream processing and/or playback. Here are two common examples for both a stereo and 5.1 audio tracks:

The channel assignments for the resulting file are reported in Hybrik’s Storage Browser as well as in common tools such as MediaInfo. Here’s an example screenshot from the Storage Browser: